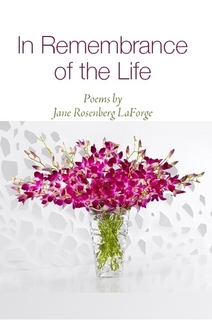 Jane Rosenberg LaForge, author of the new chapbook, In Remembrance of the Life, responds to a few questions from our summer intern Katelyn Tarasiewicz, an English major at Millersville University of Pennsylvania.

What got you started/interested in writing? Did you start out in fiction or poetry?

“I started out in prose; in journalism, specifically, although I wrote a lot of bad poetry as a junior and senior high school student. I was always interested in writing, probably because my parents were readers and they revered writers. They were also news junkies, which got me interested in journalism. I worked as a journalist for about 12 years and then I went to graduate school and got an MFA in fiction. After I had my daughter I had no time to write prose and everything became poetry. Now I write more poetry although I don’t necessarily consider myself a poet.”

Do you have any writers/poets that have influenced you, in your past or present writings? Any that specifically influenced you for In Remembrance of the Life?

“I’d say that many writers have influenced me, but no one writer influenced this particular chapbook. Kate Braverman was the first writer who ever took me seriously, so she’s had a huge influence on me. John Edgar Wideman was my thesis advisor in graduate school and he writes fiction, although he’s read some of my poetry and said it reads like a novel. Jay Neugeboren also helped me out a lot in graduate school but I can’t say he influenced me on this project. There are a lot of poets that I love, such as Natasha Trethewey and Gillian Conoley; as well as the women who wrote blurbs for me, Leslie McGrath and Chella Courington; but they really weren’t an influence here. I did very deliberately use a Sylvia Plath poem in one instance here, because I was fooling around with the ideas that Plath used, so I could set off my obsession in a different way. But I think what influenced me the most was a funeral notice for a friend that began, “In remembrance of the life.” That really did it for me.”

You have written another book before, An Unsuitable Princess: A True Fantasy/A Fantastical Memoir. How does writing poetry differ from writing a fictional story?

“For me, writing poetry is like putting out a little news bulletin; grabbing a little bit of time and hardening it so I can remember what it felt like even though it’s rather ephemeral or fleeting. So it’s much more like journalism than actual prose writing is. That said, I pay a lot more attention to sound and rhythm in poetry than I do with prose. With prose, I’m looking for an entirely different effect, kind of a more long-term and global impact; and I have a lot of other goals, such as nailing down a certain characteristic in a character, or making some kind of pedantic point; or dramatizing something that needs to happen in order for the rest of the story or argument to go forward.”

This new chapbook focuses on remembering people that you have lost. Was it hard to write about that since it is such a sad topic?

“I think most of my work is about remembering people or places that I have lost so it was no harder to write the chapbook than it was anything else. What was difficult was maintaining the intensity of feeling I had been dealing with for about five years to the point that I could call on it in any time and put it into words. There was one death in particular that seemed so senseless to me and I think that it galvanized a lot of the ideas I was carrying around in my head, and that’s what led to the chapbook. I wanted in the beginning to make the chapbook all about that one person, but I realized I couldn’t sustain it without running the idea into the ground, so I thought about some other folks who have recently disappeared.”

In Remembrance of the Life is now available in print. Pick up a copy at lulu.com, amazon.com, or Barnes and Noble.